We’ve all been warned before. Whether through Narcissus, Dorian Gray or Snow White’s evil Queen. Mirrors are dangerous. The vanity that they conjure from within brings the ultimate downfall, even for the powerful among us.

Yet, we are a culture completely obsessed with staring at the looking glass. It’s not always in the bathroom vanity or front hall mirror, but from Facebook profile pics to selfies on Instagram, it’s pretty obvious that we never really pull ourselves away from our reflections. 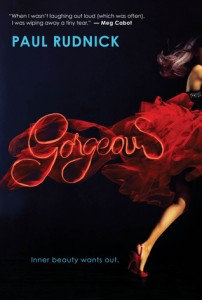 I recently finished devouring the book Gorgeous by Paul Rudnick (who wrote the screenplays for Addams Family Values and In&Out). It’s a sort of Cinderella/reverse Beauty and the Beast story for YA (which is all I read these days because of my work audience) about a young, average-looking girl, Becky, from a trailer park in Missouri. After her mother dies, she is summoned to New York City to meet fashion guru Tom Kelly. He offers to create  3 designer dresses for her, which will transform her into the most beautiful woman in the world. For one year. In that time, she must fall in love and get married, in order to stay that way. And so, her alter ego, Rebecca, is born.

When Becky is alone, she still sees herself as the small-town girl with bad skin and awkward teen limbs, but when anyone else is in the room, the mirror reflects an image of overwhelming beauty–to Becky and the world.

It sounds very fairy tale and far-out, but the author is incredibly witty, creative and hosts vivid characters, such as Becky’s best friend Rocher (named for the “high-class” chocolate Ferrero Rocher), who has the biggest (and most hilarious) potty mouth I’ve ever read in a teen book.

The novel is obviously about the all important topic of inner beauty, which has been dragged through the mud in cheap Hollywood comedies so much that I almost didn’t want to pick up the book. But it surprised me. And it made me think.

Particularly, with these lines:

I turned away from the mirror, which was a really good idea, because mirrors lie. This mirror had told both Aimee and Suzanne that they were glamorous stars-of-tomorrow and it had convinced Rocher to get her nose pierced and if I kept asking it to tell me everything, or anything, it would make me want to kill myself, or get cheekbone implants, or slam my fist into its snickering, unreliable, glittering surface. Mirrors are more dangerous than guns or cars or crystal meth, because they’re cheap, readily available and everyone’s addicted.

What stood out to me, other than the fantabulous writing, was the undeniable truth presented amidst a world of magic realism where putting on a gown covers all flaws. Mirrors lie. They are like drugs, but worse, because everyone is addicted. And they don’t know it.

We don’t know it.

And I am just as guilty as everyone else. After I found out my husband of 3 years had cheated on me, and I left, taking off the rocks from my finger, I was mortified by the ring tan line that their absence left behind on my finger, created from a recent trip to Costa Rica (where I thought we had fallen more in love with each other). It was a constant visual reminder of all that I wanted to obliterate from my memory, lest I spend one more moment wading in my pool of tears while I hid away in the spare room of my brother’s condo uptown. I just wanted it to melt away. Then I could feel the proper numbness I desired. Then I could move on.

So, I decided to head to a tanning bed (go ahead, judge me). Warmed by the artificial lights, I was convinced that a healthy glow gave me a better defence against the cold of the real world. I thought it hid the pain and puffy eyes behind a happier, prettier, thinner me. I wanted it to lie more effective than I could ever do with a quick, “I’m fine.” And, maybe it did. For awhile.

But the ring tan line faded quickly and all it left me with was a bronzed shell that felt empty inside. And an addiction. I liked the way I looked. I liked the control. I liked the lie.

Eventually, I forced myself to give it up. Because I kept seeing images that paralleled a tanning bed with a coffin. Because I wanted to avoid being a wrinkle-puss at the age of 38. But also because I wanted to take back the power from the mirror, which I allowed, for too long, to tell me how to feel that day, based on how I looked. I let the reflection in the mirror define who I was, rather than the other way around.

For awhile, maybe it was a crutch that I needed to survive the pain that was going on inside. I could look in the mirror, see something I liked and have that image tell me that there was still beauty (and hope) in the world. But, as with any addiction, it had too much power. How many times have I felt okay, then looked in the mirror, been unimpressed by the girl with the lop-sided grin, and my mood got knocked down a few pegs? Or an entire tower of terror elevator drop?

Paul Rudnick is right. Mirrors lie. Unbelievably. Horribly. All the time. The image we should believe more than our shiny reflection is the one of the best friend who hasn’t seen us in a few days and smiles, a wide stretch, and reaches out to embrace us. Or the lover who brushes our hair back from our faces and closes his eyes in contented bliss. Or the niece who rushes to open the door for our arrival, because it’s been way too long since we came over to play.