The Inspiring Nature of Nature 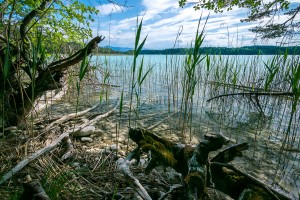 I sat on the bank of the escarpment this weekend, looking down over the edge whenever my eyes glanced up from the pages of my book. The novel I was reading was much darker than the bright, warmer-than-normal spring day and the heat of the sun beating down on my shoulders helped to lighten the mood. And freckle the two shelves of skin there.

Out in the distance were two familiar silhouettes, paddling a canoe across the expanse of water below. Following them with my eyes, I saw one reach up a hand and wave lightly. The other followed. I waved back.

And, suddenly, a scene appeared before my eyes (imaginary, but not hallucinatory–go with me here; I’m a writer, so I’m only HALF crazy). What if the people in the canoe were to witness a kidnapping, of someone they knew, from the water? Too far to do anything to help. Too in view to prevent seeing it all.

And then, I wondered, who is kidnapping this girl from such a peaceful setting? Is there a (somewhat) rational explanation for her being targeted? Why, other than the obvious, does it fill the gentlemen in the canoe with a Molotov cocktail of thunderous emotions? What would they do to try and find her? Where could the kidnapper have hidden her?

I did an interview with director Shawn Levy (Date Night, Real Steel, Night at the Museum) a little while back, who said that the story in every great film he’s ever worked on has started from a basic question of “What if?” What if you could revitalize your marriage with the events of one night? What if the underdog could be trained by a former champ to become a contender? What if the museum exhibits came to life at night?

This “what if” concept has stayed with me ever since, and I am constantly applying it to possible story lines for future writing. If it’s an interesting “what if” that can be proposed in one short line and grab someone’s attention, it’s worth the blisters on my fingers to try and hammer it out. Right?

But it’s funny when that inspiration strikes. For a fiction writer, it could be a character, it could be a scene, it could a complex dystopian world that unfolds itself to you in one spectacular moment before going back into hiding. Then, you need to start the tedious/exhilarating experience of trying to pull it out, to make it grow. It’s nothing more than a seed that can wither and die so easily, and you are left with no proof that it ever existed in the first place. As author Rick Yancey (The 5th Wave;  put this on your summer reading list NOW) once told me, writers have to be patient gardeners.

If writers are indeed gardeners, creating manicured lanscapes from the wild chaos of nature, then I guess it’s no wonder that being outdoors can be the most inspiring location for the wordsmith. The poets and writers of the Romantic Movement in England (circa the early 1800s) wrote about little else than nature itself (which I remember from university because I was ready to scream at them to write a little dialogue here and there, in between their long-winded descriptions of the almighty mountainside, the turbulent sea or the country garden). But it is inspiring, even now.

Being delegated to my closet in the sky downtown Toronto, I do feel inspired by the colourful city lights and impressive skyline. It excites me. It widens my eyes. It overwhelms the senses. Yet it’s not the same inspiration. Not at all.

I must admit, the only time I crave the solitude of a cabin in the woods, away from all the urban delights I revel in on a daily basis and swear I cannot live without, is when I think about sitting down to write pages and pages of something I hope to one day see published. It seems less daunting and more organic in a setting like that. Or maybe it’s just an escape from reality that parallels the journey of diving in to write a book. It’s different than my every day, and, in some ways, that fact alone makes it appealing

However, never having actually written much in that type of environment, I am ill equipped to really tell if I could stomach the isolation for the time needed to pound out a manuscript.

But, then again, what if I could?