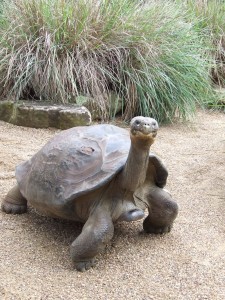 Life is a marathon, not a sprint. Slow and steady wins the race. Tortoise trumps hare.

I know that’s what people say, but recently I’ve been questioning this notion.

Because I’m a writer, all of my life becomes a metaphor, and none is more true, for me, than with health and fitness. A friend and I were discussing it the other day; just as with a workout, you won’t see any improvement until you experience some pain, so in a relationship you can’t possibly expect to grow if you don’t go through hard times together. No pain, no gain. Such is life.

But that one is easy.

Here’s my issue with the marathon metaphor: I had been training most of the spring and summer in order to race in the Warrior Dash, which is an extreme obstacle course (as is on trend, with races like Tough Mudder, only without the insane electric shock, because, well…electric shock??? Thanks, I’m good). I’m not a natural born runner–I have bad knees from back in my gymnastics days, so I had to be careful about slowly building up my endurance.

When I finally got my footing, I was doing a steady run on the treadmill, at least 3.5 miles 4-5 days a week. I thought I should be in the best shape of my life. But for some reason, I wasn’t.

Nothing made this more clear to me than when I got invited out to a CrossFit class at the Academy of Lions in Toronto, in order to write an article on it for the magazine (coming this fall). I describe it as basically conditioning on crack. In a good way.

The class is divided into three parts: a warm-up, where they asess your skill level, movement and take note of any areas of difficulty or injury; then they do skill building (we did pull-ups); lastly, is some type of cardio, made up of a few different stations. Ours were modified pull-ups on rings, squat-lifts with a kettle bell, medicine ball throws and jump-squats to an elevated surface. Only one minute at each station, pushing as hard as possible (so, four minutes in total), then one minute to rest. Repeat.

After the third run-through, I was fairly certain that my heart had run away with my lungs, leaving only a goodbye note that read, “Screw you, I can’t do this!” It was only 12 minutes of physical activity and I was left in a huff. My whole body was shaking, and my muscles had that weird heavy feeling that you just know is going to mean you can’t move the next day.

On the other hand, I have never felt so powerful. I had used my entire body, every inch of my strength and finished the class strong. It was challenging. But a marathon it was not.

When I sat down with the founder afterward, Dahni Oks, I asked him about my plateau. He explained to me about the body becoming too efficient at movement that it knows too well. It gets lazy, and you don’t see any growth. He suggested tabata training, where you would run full out for 20 seconds, then rest for 10, repeating this four times. So, again, a very short amount of time–technically only a minute and 20 seconds of rigorous activity. But somehow enough to keep your body guessing.

It got me thinking. Maybe life isn’t the marathon we think it is. Maybe I’ve been doing it all wrong. Maybe it’s just meant to be a series of crazy, intense, completely focused moments, broken up by times of rest.

Because I work primarily from home and there’s no one to yell at me about sitting at my desk between the standard 9 to 5, I’ve been able to put this to the test. A few hours of intense and focused work, followed by a short amount of downtime. It’s a model that is more up and down than steady, but so far, it has really worked. My productivity is up, and lately I’ve been feeling less stressed, even though there is still plenty to stress about–especially since I got in a segway accident on a press trip (they took us on a obstacle course), which resulted in a epic crash on my part, where I busted my knee a mere two days before the Warrior Dash and I had to drop out because I suddenly had two kneecaps on one leg. And for my next trick…

Perhaps it was just life’s way of saying, “Take your 10 second break, already.” 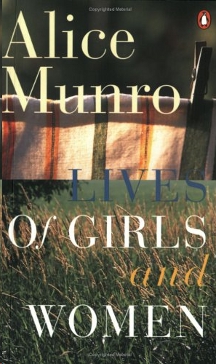 In honour of Alice Munro’s birthday today, I thought I should make my post about her. If you haven’t read anything by this Canadian literary gem, immediately stop reading this ramble and pick up one of her books. An aggressive demand, perhaps, but I make no apologies. She’s that good.

I was reading this article about an interview one reporter had with Munro, right after she won The Trillium Book Award for her latest collection of short stories called Dear Life. She mentions the fact that she is retiring from writing. She says, “It’s nice to go out with a bang.”

What?! This word smith is RETIRING from writing?! The news, as you can probably tell, is a bit devastating to me. I first read Munro in university, when studying for my undergrad, majoring in English (perhaps that’s obvious). Although most of what I read these days is YA, because of the nature of my job, Munro still makes my reading list.

My favour of her work is an abnormality, because I’m not usually a fan of short stories. I dislike only geting to view the created world of the author for only a short time–I feel cheated. I also dislike writing them. For me, they either turn out like a snapshot that makes sense to no one but myself, or they get wrapped up in the end in such a pretty bow, a superficial story not worth reading.

However, with Munro’s work, the short stories read well on their own, but also together, weaving various themes in and out with complex characters and vivid scenes. She is clearly a talent, and a recognized one at that. Our Canadian literary scene could use more Alice Munros.

So, to hear that she’s bowing out? A travesty.

In the interview, she’s goes on to explain that she loves writing. But, she’s come to a time in her life when she doesn’t want to be alone as much as being a writer necessitates. She wants to be social.

Now, I’m still disappointed, but her words gave me pause. The act of writing, in and of itself, is generally a solitary activity. I can’t tell you how many nights I’ve cornered myself off, ignoring calls, emails, yells for attention for other rooms. I sit in front of my screen for hours at a time, lost in a world of my own making. I gesture with my hands, working things through. I talk out loud, sounding of the rhythm of the words when they aren’t alive enough on the page. I have conversations with imaginary people, rather than the real ones waiting to hear from me (I realize that this last bit makes me sound crazy, but I write fiction in my spare time, so press pause on recommending a good therapist). Hours and hours, with no one but me. And I’m not a published author with book deals calling out deadlines to me. My alone time, right now, is all by choice.

However, I think the loneliness is more than that, more than time spent in solitude before a computer or notebook and pen. Even when not in writing mode, the mind of a writer is continually isolated, dreaming up new stories, dredging through ones in the works, waiting for the garden of an idea to grow, making connections between meaning and metaphor, asking questions of your characters, creating backgrounds for people on the street, jumping feet first into another’s high heels or worn-through runners. Writing is not just an activity; it’s a way to see the world. Which means, it doesn’t stop.

There have been times when a story idea has come to me, even in a social setting, and I just cannot shake it’s conception in my mind. A wrestling and aggressive birth, it struggles to take form. It can be all-consuming. I have to step aside and see it through. Alone. Otherwise, I end up aggravating the people around me because I’ve failed to really listen. My head isn’t with them, even though I am automatically nodding along, my body on auto-pilot (perhaps so I don’t sit there with an open mouth, drooling, while I dream up a new storyline or revamp an old one). My apologies to anyone who’s had to suffer through me not really being present (Riley is all too familiar with these occurrences).

Munro’s words ring true to me. Being a writer means being alone, in so many ways. It’s tiring, I would imagine, after a couple of decades of being a professional loner. Right now, it seems shiny and new, with a set-me-on-fire(-in-a-good-way) type of energy.

So, Alice Munro, I salute you, on this your 82nd birthday. A path forged, a good well done, a happy, bubbly, social retirement rightly earned.