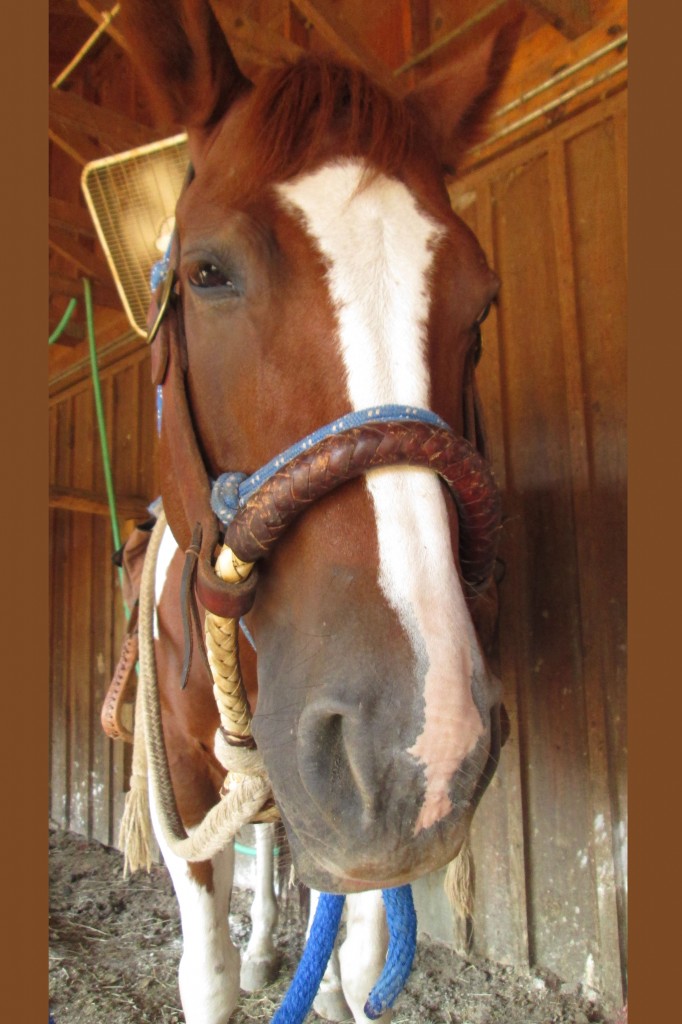 As a young child, I was riding a horse at my uncle’s hobby farm when the animal, out of nowhere, went a bit crazy. It bolted, starting running up the lane where my aunt had been gently leading it by a tether, back from a guided jaunt that was slow and, well, boring.

At the time, I don’t think I wished for not-boring, but the change of pace was at first exhilarating and then all at once terrifying. On the back of the horse, I hung on with white knuckles as we raced through the family members that waited near the house, horrified looks on all of their faces. While trying desperately to keep on the saddle with one hand, I tried to use the other to pull back on the reins and get him to stop. He was not having it. Whether he had spooked somehow or just decided he had enough of farm life and was running away to a life of crime in Chicago, I will never know.

The horse galloped along the side of the farmhouse, past some apple trees that decorated the property. Here’s some education for those who don’t know: apple trees have very low-lying branches. I smashed my helmetless head on one. Two. Three.

It was at this point when I started to care a little less about the journey. Deliria crept in and I thought I would loosen my grip a bit. As I slid sideways on the saddle, then dropped off completely, I landed in an alfalfa field and thought, Hmm…maybe I’ll just take a short nap.

I only have snapshots of the events that transpired immediately after. Like blinking intermittently as someone hits fast-forward, I remember registering people running at me, then an image of riding in the car, then being asked questions by the doctor at the hospital, then waking up every hour to my mother inquiring if I knew my own name and where I was.

My first, and only, concussion. That I can remember (ba-dum-tish).

A week later, I was cleared to go to camp, my favourite week of the summer, where we got to do gymnastics for eight hours a day and giggle in bunks that smelled slightly of musk and urine.

Want to know what I did while I was there that summer?

It’s my very literal version of the cliché phrase everyone hauls out when you fail to land that new job, or when you didn’t beat your personal best for that race or—especially, especially—when someone breaks your heart. Get back on the horse, they say, while you stifle the urge to punch them in the face.

I’ve had that urge, trust me. But then I find myself giving it a week for healing broken bones and battered egos, then I pick my leg up to set it firmly in the stirrup once again. Call me crazy, because I keep (metaphorically) getting tossed off, but I think I learn something every time. Even though it’s hard and bloody painful, it’s beyond worth it when the wind whips through your hair and you feel like flying. It’s freedom.

It’s not that I don’t understand people who choose the opposite—to shy away and run away and look for reasons not to trust, not to try. I do understand the temptation. I just don’t respect it. It’s the easy route. It will keep you safe. It will keep you from being painted with the bruises of life. But, if fear is the greatest motivator in your life, your world is going to spiral smaller and smaller, until the things you allow yourself to do can fit into a neat 10×10 box.

Want to live in a box? Great. Good for you. Just please, please, stay away from me. Find someone else who wants to play house, play games. I’ll be busy galloping off into the sunset. Life is too short and too long and too effing interesting to live anywhere but on the edge.

My bruises will fade. Cowardice? That will stay with you forever.