If I start writing, will you stop poking me in the middle of the night?

I get it. That will sound dirty to some. I promise you, it’s the furthest thing from it.

As a writer, I know full well that inspiration for projects comes at all times. Day. Night. Middle of a business meeting. While your significant other is trying to tell you something. Sometimes it’s not even a project you want to take on. It’s hard not to listen. And get lost. If I’m ever talking to you and, mid-conversation, I seem to zone out, I do apologize. It’s not my fault. Honest. 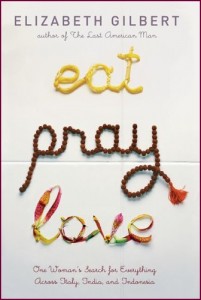 In her TEDTALK, Elizabeth Gilbert (author of the best-seller Eat Pray Love) addresses the double-edge blade of creative inspiration. “Not just writers, but creative people across all genres, it seems, have this reputation for being enormously mentally unstable,” she says. Because she wants to continue doing what she loves, writing, she asks the question of how one can do this, without becoming looney-tunes certified, destroyed by the creativity inside.

Her research takes her first to the Greeks, and their concept of the daemon, and then to the Romans, who named this creativity the “genius”–not a clever person we think of today when we hear the word, but an outside source of inspiration. “They believed that a genius was this, sort of magical divine entity, who was believed to literally live in the walls of an artist’s studio,” she says. “Kind of like Dobby the house elf, and who would come out and sort of invisibly assist the artist with their work and would shape the outcome of that work.”

This distance from creative responsibility gave artists a healthier relationship with the process of their art. Their successes, and failures, were not solely on their shoulders. The burden of being an artist was lighter. There was still work to do, but they thought of themselves as the captain of the ship, rather than the God of the waters. The job was daunting, but not sanity-obliterating.

It’s a comforting thought. I would much rather be the writer who gives voice to the stories that are whispered in my ear by this genius, than the writer who accepts the burden of playing magician, to conjure genius works in the first place.

But, sometimes it would be nice to control WHEN that whisper of inspiration decides to invade my mind. Like, say, NOT at 7am on a Saturday morning of a long weekend when all I want to do is sleep-in because it’s the one morning I don’t HAVE to be up.

Alas, one can only ignore Dobby the house elf for so long.

I awoke early this morning, after a fitful sleep where I tried to ignore my whirring mind that was drowning in the ideas I scrawled down yesterday, after work: an outline for my next novel. It’s ambitious. I’m nervous. But it’s nice to know I’m not truly alone when I sit down at the blank page. Maybe, just maybe, that genius is looking over my shoulder as I write the prologue.

So, yes, I have started writing. Genius, art thou satisfied? Perhaps you can stop jabbing me in the ribs at the crack of dawn? By which, of course, I mean please do continue. I will need all the poking and prodding I can get. But at least tell me where your snooze button is.

Watch the video and read the transcript here: http://ented.babblebuzz.com/elizabeth-gilbert-your-elusive-creative-genius/

I got lost today.

I was sifting through an old portable hard-drive and stumbled upon writing of mine from years ago. It trapped me for a good hour, reading back through my old thoughts on life and love. I could be pretty angsty, in my teen years. And wordy. Yeesh. Pretty sure I had an opinion about everything (which would explain me getting voted “Most Opinionated” in my high school year book).

Despite certain changes in perspective, the new me still smiles and cries over reading about the old me. “It feels like a lifetime ago,” is the age-old expression. But how true the statement is, like life is divided into smaller lifetimes, connected but separate. It gave me a glimpse into a perfectly preserved state of mind, allowing me to look at it (somewhat) objectively, from the outside this time.

I think we can all learn something from our former selves–even if it’s just, “I tend to repeat my mistakes. A lot.”

So, I thought the new me would share some of the old me, from one of the most life-altering moments of my early 20s.

Context: I had just moved to Toronto, to the Village neighbourhood (Church and Wellesley)–which I still say is one of the best in the city. I was about to start my post-grad program at Centennial College in Book and Magazine Publishing, totally convinced I was headed into the book world (hey, maybe I still will someday). Excited and nervous energy abounded.

The bright lights of the city scene cascade through my window, and I sit here in wonder and amazement. I can hardly believe that I am here.  Me.  On the seventh floor, downtown Toronto, heart of THE Canadian Metropolis. In the great tradition of Carrie Bradshaw from Sex in the City, I have positioned my desk to allow me to look out onto the bustle of the streets as I write. My framed view is more east than any person who wants a sense of security might venture to go, but to me it is beautiful.  It is adventure.

After spending my undergrad years in the same city which contained my high school era, the journey to larger things feels like a long time coming. Four years reading book after book, but never feeling connected enough to the material—to write about books and authors, but not create or know them—has led me the world of publishing. And I feel very much at home, even though I am a tiny soul in a sea of the million faceless.

I can already tell that my classes are filled with people who are passionate about literature. People who walk into a book store and are overwhelmed by the mere sight of so many tightly bound pages. People who read not because they have to, or even want to, but devour novels and articles and poetry and words because they need to. People who believe that the written word is not dying out, but thriving among the weeds and vow to water what they can. People with ideas. People like me.

Everyone that I talk to from back home tells me that they are certain I am going to plant my roots here and never leave—perhaps that there is something about this city which connects to my own ruby red slippers and I have finally clicked hard enough to send me home. And so, I can’t help but wonder, after all my heart has been through over the years, is it possible to fall in love with a city?