On my fourth day overseas, we fly to Dublin, Ireland for a little euro-exploration. My brother’s been in the UK for two years and travelled extensively but never here.

After settling into our Airbnb, we hit the streets to start investigating. We discover quickly that we’re staying in the Jameson Distillery district. They moved the whiskey production out to the countryside to be closer to the barley suppliers, but have kept a tour and tasting house on the original grounds off Bow Street.

The Irish tour guide inside is friendly and generous, cracking jokes and pouring us comparison shots of Scotch Whisky, American Whiskey and Irish Whiskey: different spellings, different flavours, all with the same burning feeling down my throat. I am no connoisseur but appreciate the tasting lesson all the same. 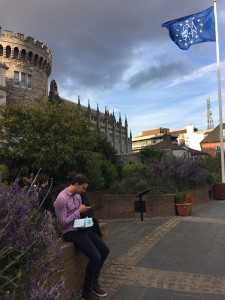 After another glass of whiskey, this time sweetened with ginger ale, we head out again in high spirits—pun intended. We walk along the River Liffey, pass through gardens by the Dublin Castle and finish on the grounds of Trinity College. It’s beautiful, all of it, but flat. Despite the ornate surfaces, I know nothing about the people, places or plots that lurk behind the historical buildings around us.

We sleep late the next day, tired from a day of travelling, but scramble out to meet our walking tour on the steps of the Bank of Ireland. We’re a few minutes behind and grab the tail end of the group. I miss the tour guide’s name but not his warning that swear words will be used throughout the tour for comedic effect. In his mind, he says, the English brought this language to Ireland so they’re all bad words.

We walk in a huddle of twenty or so, trying to stay together through traffic lights and intersections where I’m not sure which way to look for cars. Our first stop is Dublin Castle where the guide launches into the history of the structures around us, all built in different centuries: a fortification first for the Vikings in 930, due to the ground’s high elevation; a stronghold for the Normans when they invaded Dublin in 1169, who then built more ditches and walls around the compound; an English high-security prison for Irish hostages in the twelfth century, who were kept in the Record Tower which is the only surviving structure from the original medieval castle and has walls more than three metres thick; an attraction for tourists who stare at the top trim without realizing it wasn’t added until centuries later, presumably to make the tower look more “castle-y.”

During the 1500s, Red Hugh O’Donnell, a 15-year-old Irish Chieftain, was locked in this tower to keep his clan and another from forming an alliance against the English crown. But Red escaped the prison in true Shank Shank Redemption style by crawling through the sewer.

Because of the castle’s tie to English rule, when the Irish won their independence in 1922 they decided it would no longer be used as a house of parliament. Inaugurations, ceremonies and state visits still take place here (Obama was hosted in the castle during his visit), but parliament uses a different location. “Essentially, it’s the largest, most expensive tea room in all of Ireland,” says our guide.

As he continues his monologue, what was a beautiful building yesterday transforms into the scene of several stories—Red’s and many more. Listening, I’m reminded of the reason for my storytelling passion, both for absorbing the words and creating them. Stories reveal what’s hidden beneath the exterior—of a building, a country, a person—of something maybe you always wondered about. Or maybe you never thought to beyond the first glance of assumptions. How much harder is it to judge/stereotype/ignore a person once you know their story?

Though storytelling has played a crucial role throughout human history, these days we sometimes think of the word “story” as referring to a thing you make up. Or something important only to children.

We forget that stories are about people, real or imagined, about the time and the place that forged their character and drove the path of their stars. Stories are how we learn about ourselves, both past and present. They turn a flat landscape into something teeming with life and history and meaning. Stories are what connect us all.

Connecting stones of the past, I’m lost to the present. I have to run quickly over tourist-worn streets to catch up to the group.