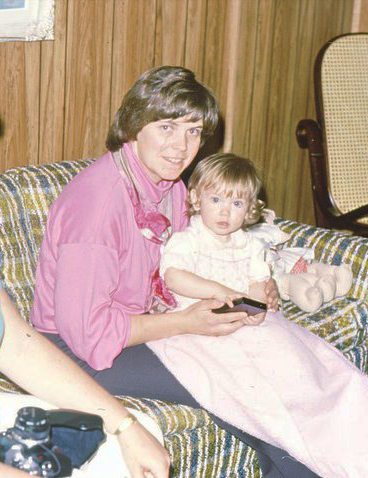 My mother’s hand felt smaller than I remembered. As I grasped it in my own, memories floated back to the front of my mind, times when I was the one who needed the comfort of her touch to chase away the monsters. I have very vivid recollections of padding into her room at night, the door right next to mine, completely convinced that my carpet floor was covered in frogs and toads. I would not be able to go back unless she guided me safely into bed. I needed to draw strength from her hand in mine. Maybe that’s what it still was today.

We waited, parked in the hallway outside the second-floor operating rooms. As is my habit of late, I perched myself on the narrow bed, my seat snuggled in close to her toes. Doctors bustled in and out around us, shuffling with important tasks and slippered feet. When they called her name, tiny panic set in. The moment of truth. No more waiting.

We have spent a lot of time watching the clock lately, passing the time. In hallways, like today, or hospital rooms, or doctor’s offices or chemo centres. It’s like a game. Or that annoying Lamb Chops song that never ends, which my little brother unfortunately loved for way too many years. It’s bearable, for awhile, but the longer it goes on, the more you are convinced that you are going insane from something that appears fairly easy to manage.

Without going into too much detail, the surgery was happening because of a complication from her shrinking tumour. Good news, bad news. After being in and out of the oncology wing, my mom was settled in for a week-long stay amongst other surgery patients–a kind of all-inclusive resort, except one where you can’t eat or drink or do much of anything.

But finally the wait was over. The doctors visited us in that hallway, one by one, to explain what they would be doing. Her grip on my hand got tighter.

No more waiting was a good thing. And yet, it always hurts a little to let go. To put your trust in someone else, in a procedure you don’t fully understand. Waiting is the breath you hold before making a choice, deciding on one path or the other. You fear making the wrong one. Holding still at least means you still have the possibility of choosing correctly, of getting it right.

But what can be accomplished by standing still? Being frozen in a fear of failure is a self-fulfilling prophecy. We become what we put our mind, our energy, behind. Ruminate on the positives, the surgeon told us. My mother smiled nervously at him. Yet his words had pull with me.

I’ve been working on my second book for eight months now. Last night, I typed out the last chapter. I felt like I had been holding my breath for all of those months, working away, spending hours staring at the screen and mulling over the same words, the same plot outline again and again. As I hammered out those final letters, I expected to feel a relief that it was over. To have the words of a story turning over in your mind constantly–scenes playing out in both waking and sleeping hours, characters slashing at you with dialogue, plot lines shifting and evolving like a living being–it’s enough to drive you a little nuts. So, once it was all out there, on the page, I expected something monumentally peaceful to descend upon me. Choirs of angels, and all that. But the emotions that built up inside and caused me toss and turn in the absence of sleep that night, were anything but respite.

The idea behind the novel, I felt, was great. Powerful. But what if the execution, my decisions, were off the mark? What if it was the right story, but I got the storytelling wrong?

Like my comprehension of what happens in an operating room, I do not fully understand the process that occurs when crafting a work of fiction. They both seem like a sort of magic. Both can produce miracles or travesties.

With my writing, I chose to dive straight in, not just praying for a miracle, but keeping my sights locked on the certainty of one.

I set a goal of finishing that seemed somewhat unrealistic and would hear nothing of other’s assurances that I could have more time, if I needed it. No, I thought. I will trust that this is the time I need. No excuses. No allowances. End of April, I would have my second book finished. I trusted that what seemed impossible meant only that the goal was just enough out of reach to make the reaching worthwhile.

With my mother’s operation, I chose to be certain that she would not just emerge, but do so with good results. Out in that hallway, they told us to say a goodbye, that it was time. We shared a quiet moment, hands still clenched together. I leaned over to kiss her, whispered my affirmation in her ear–words that are private, for now, but may reveal themselves when the time is right–and told her she was loved. She was wheeled into the OR. I was escorted to the waiting room (apparently my waiting had only just begun).

After two hours, the doctor arrived with good news. After five hours, we were allowed to see her. She was groggy, but awake and okay. Her shoulders shuddered with sobs that bubbled up from a tension she wasn’t entirely aware she had carried around. It wasn’t sadness that filled her face with tears. Her emotions were spiralling. The feeling of relief is never quite what we imagine.

When that breath that you’ve been holding is finally released, the pressure in your chest subsides, your tense muscles relax their grip on your bones and you feel light again. For a moment.

But then, of course, you are poised to fill your lungs again. The next challenge, or time of waiting, comes right away, it seems.

Is it possible, I wonder, to breathe evenly through it all? To avoid the peaks and valleys of our anxious lives, letting it in–the worry, the fear, the tension–just a little, then pushing it out again, to accept the warmth of a smile, the carefree nature of a laugh, the kindness of others.

Perhaps that is the challenge of life, to go from gasping and sputtering for air to a calm inhale and exhale. We master it gradually, taking years to learn that the first step in every hardship is to just keep breathing.

Back in her hospital room, my mother is poised to wait again. This time for recovery. I watch her struggle with knowing that one huge hurdle is over, but there is still far to go. I wish I could chase away her monsters. All I can offer her is a hand to hold and the sum of what my less-than-straight-and-narrow life path has taught me thus far.

One thought on “Just Keep Breathing”