Museums Should Be Free 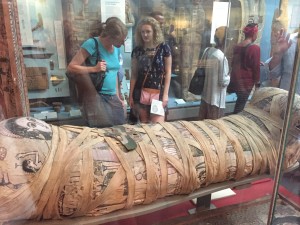 On my second day in London, I’m wandering around the British museum in a casual attempt to pass the time. My brother is meeting a friend who’s visiting with his family and happens to be in the same area as we are strolling by. I weave my way past the Rosetta stone, turn left at the entrance to ancient Japan and walk through to the Egyptian exhibit.

I love learning about history but have never been wild about museums—it’s the feeling of being herded through a cafeteria line that irks me, with someone else’s arrangement of artifacts in one giant, impersonal line rather curating how and when and in what order you discover knowledge of civilizations past. There’s an impetus to see everything, all in one go. You need to get your money’s worth, after all. Now or never.

And so you bump along, straining against someone’s elbow to get a picture of the painting or the rock or the cracked porcelain teacup that you’ll capture once and never look at again. The kid belonging to the family behind you charges ahead and cuts off your path to the glass case of 14th century jewelry, only to be snapped back because he’s on a leash, a real one, that tethers him to his owners—I mean, parents. You step on the heel of a woman in front of you who deviated from the group’s steady, shuffling pace, but now she’s glaring at you like you didn’t apologize or you did and she doesn’t speak English, or you did and she doesn’t think it expressed genuine empathy. You try to avoid the scowling that continues a beat too long by pretending to read a blurb near the sarcophagus about how it was later used as a bathtub, which seems like a creepy way to repurpose something and you start imagining what it would feel like to soak in something that once held human remains. Someone steps on your heel. Without realizing it, you’ve also slowed your pace, continuing the cycle. You scowl at the person behind you because it feels like tradition, then pick up the pace, quickly forgetting the bathtub when the next artifact and accompanying text is in front of your eyes with only moments to skim through. You don’t want to be stepped on again. There’s so much to see. Altogether, the halls could be 100 kilometres long, stretched out end-to-end, but it’s coiled in one space like a crammed maze of intestine. Plus, it’s only open for 12 hours, so you need every minute you can.

The pressure to see it all, to pack it in tightly, means you miss the highlights—maybe only one or two—that could have more personal meaning. In a blur, you pass by the painting or sword or handwritten letter that required more time to absorb, study, learn but could have changed your perspective on a period of time—a new understanding for what came before or even what you’re approaching now.

Here, in the land of free museums, there lies the potential for this to be different. In the absence of an entrance comes the freedom to wander, to get lost without worrying you went the wrong way. You went your way. Without a fee, you are allowed to order a la carte. Savour a few rather than binge on it all. You can, after all, come back for seconds whenever you’d like.

For me, today’s order is Cleopatra. I stand in front of the decorated wrappings of her personal tomb and get lost in thinking about the girl who lived in the world once and now lives underneath the glamour we have thrust upon her. 17 years, 1 month and 25 days. In death, people are constantly watching her, this cafeteria line like a constant wake. I wonder: Did she feel so valued and seen during the 17 years, 1 months and 25 days that mattered?